Kerry is a professional ornithologist and independent research consultant, with extensive experience in conservation management, pest control, resource protection, sustainability and eco-tourism, both in New Zealand and overseas.

Kerry works on the principle that every job undertaken by Enviro Research assists in protecting New Zealand’s unique natural resources, and may in some way promote greater resource protection and resource enhancement, for the benefit of present and future generations.

Kerry’s ancestry includes polar exploration with Sir Robert Falcon Scott’s ill-fated expedition to the South Pole in 1912. This prompted a visit to Antarctica in 2009 to pay respects to Captain Lawrence E.G. Oates (“Titus”).

Kerry received a Conservation Award in 1999, from the Tongariro/Taupo Conservancy, Department of Conservation, for services to the natural, historic and cultural resources of the Central North Island.

He has been chairman of the Ornithological Society in both Wellington and Volcanic Plateau, and is currently President of the Hamurana Springs Incorporated Society. Is a keen ornithologist, competent public speaker, photographer, tramper and angler.

In 2000, Kerry formed the Whakamanu Wildlife Trust, and has held the roles of Chairman, Secretary, Treasurer, and is now actively involved as a Project Manager. The Trust has produced and returned in excess of 100 juvenile kiwi to wild populations in the Ruapehu District. 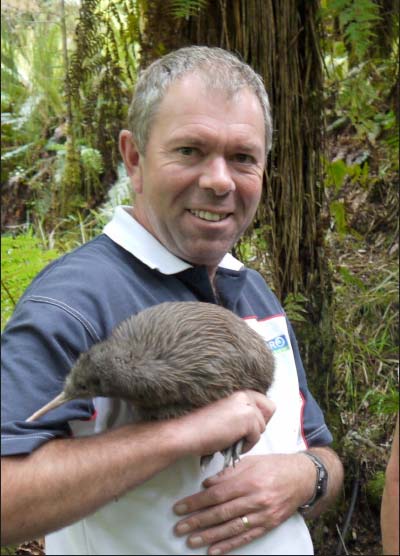 Kerry holds Kokiri prior to release